Whether a coating system has a cosmetic or protective function, if it does not sufficiently adhere to the substrate, the intended function cannot be guaranteed.

When a coating system does not adequately bond to the substrate its protective and decorative properties will be lost prematurely. In the coating industry a wide variety of tests are used to determine the level of adhesion of a coating film to a substrate. Testing of adhesion is always destructive. The coating system will get damaged as a result of the test. Repair of damages of the test area should therefore be considered. There are a number of test methods available ranging from cutting tests to “pull off” tests. Click here for an overview of the most common methods for the detection of pinholes. 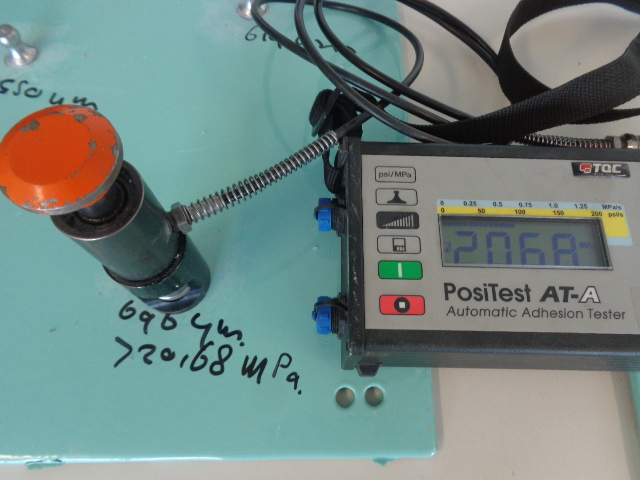 Measuring the adhesion of a coating system is in all cases a destructive test. The coating system will get damaged as a result of this test. For this reason adhesion testing is often performed on separate test panels, so called “reference panels”. These panels are prepared and painted simultaneously with the actual coating process under the same conditions and circumstances. There are different types test methods. There are so called “cutting tests” as described in ISO 2409 or ASTM D 3359. In these tests incisions are made into the coating film to be tested following a specified pattern described in the standards. Tape is applied to the cut area and subsequently removed. The degree of removal of the coating film is compared to a scale that is part of the standard and the appropriate degree/level of adhesion is designated. There are also so called “pull-off” adhesion tests. These tests are performed in conformance with ASTM D 4541 or ISO 4624. In these tests a test dolly is glued to the coating to be tested using a solvent free epoxy adhesive. After curing of the adhesive the dolly is pulled from the substrate using a hydraulic or mechanical puling device until a break occurs or a minimum specified level of force has been achieved. Aside from the achieved force also the break itself is evaluated with respect to the location and size of adhesive and cohesive failures.