Sufficient film thickness of a coating system is essential in order to obtain the desired degree of barrier properties. Excessive film thickness, on the other hand, may result in coating failures such as cracking.

Coating systems can only function properly when applied within  a set “thickness range”. In the old days the common thought was “the thicker the better” but that is no longer the case. Most modern coating systems will also fail prematurely when applied to thick.  When a coating system is applied to thin the necessary barrier properties will not be achieved resulting in premature corrosion. When a coating system is applied to thick this may result in cracking, incomplete curing or the development of high internal stress levels. Dry film thickness is specified in microns or mills but sometimes also in millimetres or part inches.

The modern equipment is accurate enough to measure reliably in thousands of a millimetre. DCC has the knowledge, experience and advanced equipment to measure the thickness of coating systems and to assess the results against standards such as  ISO 19840 or SSPC PA2 or (other) requirements mentioned in the coating specification or guidelines from coating manufacturers. A proper coating specification provides guidance with regards to the number of readings to be taken, the method to be used, the proper calibration method to be used and criteria for acceptance or rejection. DCC is also able to assess the practical achievability of dry film thickness limitations. Click here for an overview of the most common methods for measuring dry film thickness.

Dry film thickness can be measured in accordance with ISO 19840 or SSPC PA2. There is no other subject in the coating industry that provides more cause for discussion than the measuring of dry film thickness.  One of the main reasons for this is that often the coating specifications lack clarity. It is common to use the term “average coating thickness” to interpret or justify the applied coating thickness. In reality it is more complex than that, an area with a low dry film thickness provides a potential for corrosion. An area with a very high coating thickness may on the other hand induce blistering or cracking of the coating film. The coating applicator should always have a workable range (thickness tolerance) to be able to apply the system. Specifiers should be aware of the fact that, when using brush application no more than 80-90 microns of dry film thickness can be applied consistently and when using a roller at best 70-80 microns can be applied.  It is also important to realize that, when using spray application on complicated structures a margin of 300% (the necessary gap between minimum and maximum thickness) is not unusual. Properly assessing these matters beforehand will avoid discussions during the actual execution of the work.  Also the number or readings to be taken, the tolerances, relevant standards an last but not least the calibration methods will all affect the outcome of the measurements. DCC has the necessary knowledge experience and equipment to measure the dry film thickness of coating systems based on the requirements of the coating specification or guidelines provided by the coating manufacturer.

Call or mail DCC if you have any questions with regard to measuring dry film thicknesses during the coating process. 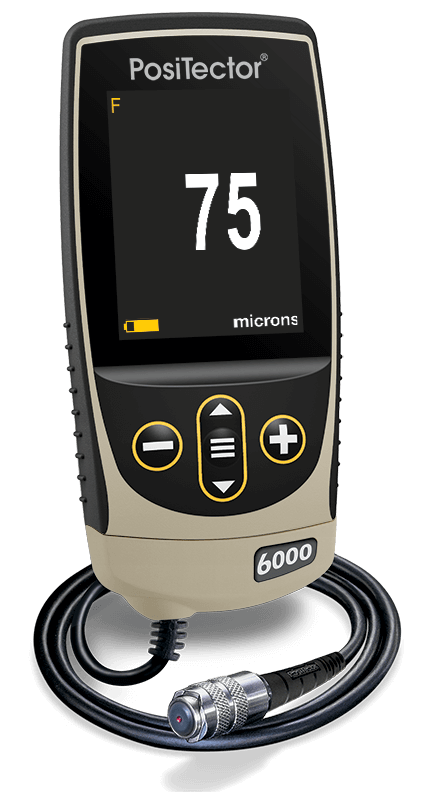